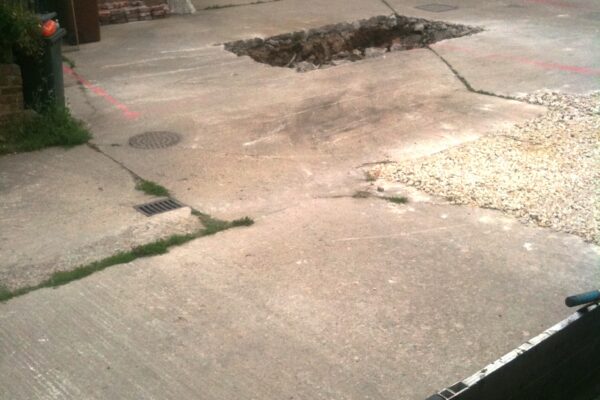 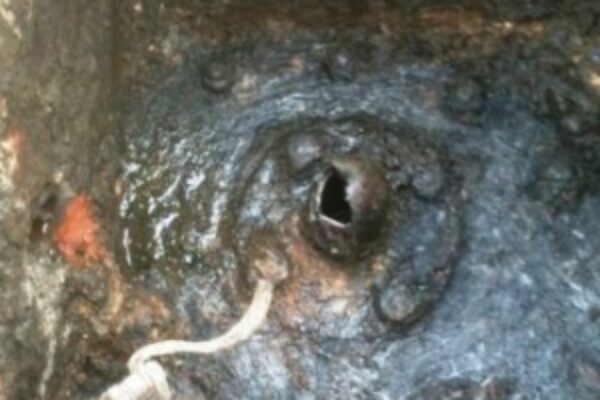 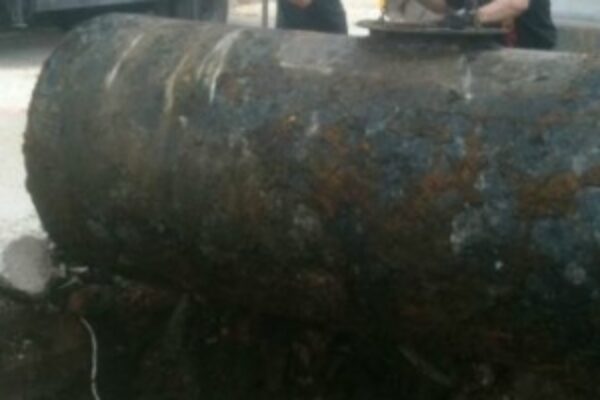 Lithos were commissioned by the home owner to project manage the activities of a specialist tank removal contractor (JW Hinchcliffe), supervise the works, and provide a verification report to the Local Authority.

After an agricultural supplies warehouse closed in 2008, the owner of an adjacent house purchased part of the site, before the remainder was sold to a property developer.  The house owner knew that there was an underground fuel storage tank (UST) beneath the purchased land and accepted responsibility for its removal, as required by a Local Authority planning condition.  A ground investigation undertaken in 2008 had suggested the site was underlain by permeable glacial sands, but no evidence of leakage into the surrounding ground had been recorded in boreholes advanced adjacent to the tank.

The brick-lined inspection chamber was cleared of fuel-contaminated soil\sludge, and a circular steel inspection cover was exposed.  The tank was dipped and found to contain about a 150mm depth of residual diesel fuel, which was pumped out.  The tank’s atmosphere was then purged with air, before a JWH employee (equipped with appropriate PPE, including full face breathing apparatus) entered the tank to clean it of remaining fuel and sludge residues.

The tank was located beneath a reinforced concrete slab which was broken out by a mechanical excavator equipped with a pecker.  The UST was then lifted from the ground and inspection showed it to be in good condition, with no evidence of significant corrosion or cracks.  The UST (1.1m in diameter and 3.1m long) and all fuel-contaminated soil\sludge and residual fuel were subsequently removed from site, in accordance with an Environment Agency Premise Code.

The resultant excavation (approximately 4.0m long by 2.1m wide) was inspected by Lithos’ engineer, and soil samples were recovered from each of the four sides, before the excavator cleared the base to enable further inspection and sampling.  In-situ inspection of the soil by Lithos yielded no olfactory evidence of significant contamination, and it was decided that the materials could be used to backfill the UST excavation whilst the results of laboratory analysis on recovered soil samples were awaited.  After backfilling with these “site-won” materials, the excavation was about 0.5m “low”, and this deficit was made good with imported stone.

Laboratory test results confirmed field observations that no significant contamination of the ground around the former UST had occurred, and Lithos prepared and submitted a verification report to the Local Authority which enabled discharge of the outstanding planning condition.